Leaf’s Metal U.S. Army All-American Football is back again following a huge success last year. Each 8 autograph box will on average contain 5 Metal Autograph cards, 2 hard signed Selection Tour Autograph cards and 1 Patch Autograph card!!! With 8 autographs per box. Once again the box price is very affordable. This years crop of skilled position players is huge and includes a number of top running backs and quarterbacks!!! We can’t promise 2 freshman quarterbacks in the National Championship Game like 2017, but you never know who will emerge as elite talent….

LOOK FOR:
METAL AUTOS
Extreme rarity and extreme color!! Each card is serial-numbered to 50 or less!! More parallel colors than previous years!! And look for rare, extremely low serial-numbered flag background variations!! Metal autographs comprise over 60% of the production run!

HARD SIGNED SELECTION OF TOUR AUTOS
These are the only on-card signatures in the product. The same parallel colors from 2016 and 2017 are available and each card is serial-numbered to 50 or less!! Look for extremely rare inscriptions!!

PATCH AUTOS
The jerseys worn by players for this event are the sickest imaginable! Every memorabilia card is a patch and each card is serial-numbered to 40 or less!! Only the skilled position and 5-STAR caliber players are included in this exclusive sub-set!!

EXTREMELY RARE INSCRIPTIONS
See below examples of inscription cards that will be inserted into this product. 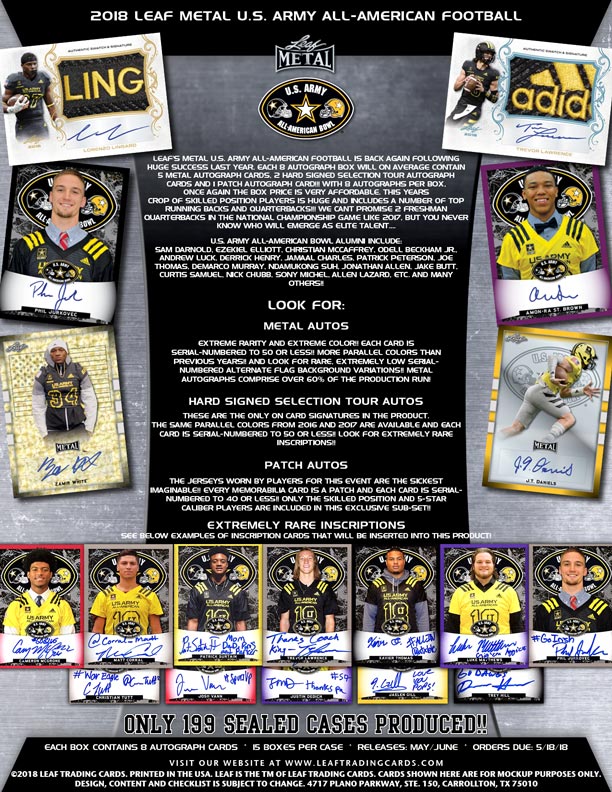